Structural Engineering - at it's Exciting Best - then & now

Albert Speer, Hitler’s Architect of the Third Reich, pointed out in his Autobiography that the Architect was the melding of Art and Science, expressed in the name, with Technician as part of the name.  Architecture at it’s best is Holistic in nature – a Unified Design.
On the flip side, within the Design Professional community, Architects and Engineers tend to see themselves as total opposites (right half brainers and left half brainers).  Whether they believe it or not, this perception is a choice that they have made individually for themselves.  I say that as an Architect and as a Structural Engineer. I am both and, fortunately, I do have both a right half and a left half to my brain, which I see as an advantage.
The reason that Architects tend to be generalists and Engineers tend to be specifists is primary due to the educational system that trains these disciplines.  Architectural Schools actually have classes, whose only purpose is to instill creativity in the students.  Engineering Schools focus on the math.
There is an old joke that says:
“The Architect is someone, who knows a little bit about a lot of things.  He goes on learning less and less about more and more, until he ends up knowing absolutely nothing about everything.
The Engineer is someone, who knows a great deal about a few things. He goes on learning more and more about less and less, until he ends up knowing absolutely everything about nothing.
The General Contractor is someone who starts out knowing absolutely everything about everything, but ends up knowing absolutely nothing about anything, due to the fact that he does business with Architects and Engineers, and
The Sub-Contractor is someone who starts out knowing absolutely nothing about anything, but he never learns anything, due to his persistence in doing business with Architects, Engineers and General Contractors.”
Well I can’t speak for the contractors, but for the Architect’s and Engineers it is an exaggeration of an underlying truth.  And it does not have to be that way, nor has it always been that way.
Structural Engineering is actually a very young profession.  I used to work for Structural Engineers with license numbers in the single digits – it is that young.
The great Architect, Julia Morgan, after graduating from the University of California in Architecture went on to graduate from the Ecole des Beaux-Arts in Paris.  This was an Engineering School.  Like other Architects of her time, she designed the Architecture, the Mechanical Engineering, the Electrical Engineering, the Structural Engineering and the performed the Construction Management.   The fact that she designed the steam heating system and the structural system of the Oakland YWCA, did not seem to negatively impact her ability to create the outstanding Architecture of that Beautiful National Historic Landmark. In fact, I believe it helped, since it allowed her designs to be holistic in nature – a unified design. 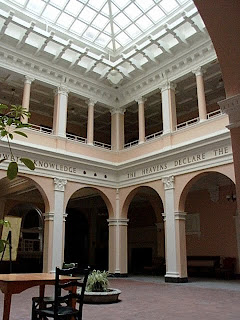 It was only over time that these disciplines became separate professions.
When I entered the profession of Structural Engineering in the 1970’s, the great achievements in Structural Engineering were Architectural, and Structural Engineering was an exciting field to enter.
Post-tensioned concrete, with it’s promise of long slender spans, was in it’s infancy. Buckminster Fuller was developing Geodesic Buildings and Tensegrity.  The most popular exhibit at the Spokane Worlds Fair was the American Pavilion – a tent structure.  Oakland California’s Oracle Arena was a ground breaking suspended roof structure, in which the whole building was a celebration of Structural Engineering.  At U.C. Berkeley, T.Y. Lin was experimenting on his dream of a Curved Suspension Bridge.  Thin Shell concrete roofs (domes, folded plates, etc., culminating in the 4 uprighted hyperpolic paraboloid thin concrete shells forming the roof soaring high above San Francisco’s Saint Mary’s Cathedral) was the most popular course in U.C. Berkeley’s Structural Engineering department.  During this period of time, so many great buildings were expressions of the Structure that support them. 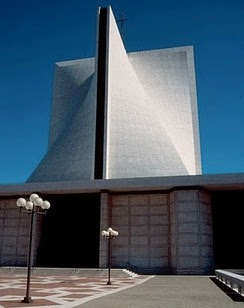